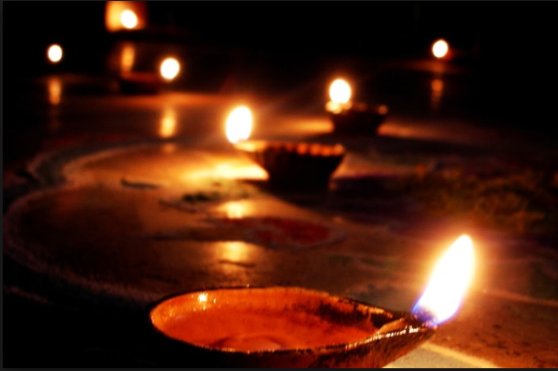 Well, this is a late post, but sharing it never the less!

Celebrated as the second of the auspicious Deepavali days, Narkachaturdashi originates from days of Lord Krishna. God Yama is also worshiped on this day to get over the fear of demon Narakasura. Lamps with four wicks are lighted at various places. People make an effigy of Narakasura, carry it to the outskirts, and burn it. Later, they take bath and burst crackers. This is the day of Narakasura’s death and hence a celebration for all.

There are many popular stories associated with this day, but the most widely accepted one is that of Satyabhama (Krishna’s wife) and Narakasura. Narakasur was a demon king, ruling Pragjothishyapur, a southern province in the present day Nepal. He gained a boon from Brahma that he shall die only in the hands of a woman. Armed with the boon, he became a cruel king. Narakasura was infamous for his wicked ruling and high disregard for gods and women.

Addicted to power, he defeated Lord Indra (king of gods) and stole the earrings of Aditi (the heavenly mother goddess). Aditi was a relative of Satyabhama. When she heard of the injustice being done to women in general by Narakasura and his behaviour with Aditi, she was enraged. Satyabhama went to ask Lord Krishna, permission to wage a war against Narakasura, Krishna not only agreed, but also offered to drive her chariot in the Warfield.

On the day of the war, both the armies fought bravely and the war continued for some time. Satyabhama fought Narakasura bravely, but she was no match to his trained war wisdom. After some days, when Narakasura got a chance, he took an aim at Krishna, hurting him lightly. Krishna fainted and made Satyabhama furious. She doubled her attack on the demon king and killed him finally. Her victory on Narakasura translated into freedom for all his prisoners and honoring of Aditi.

How we celebrate this day:

Having known the significance, here’s a quick note on how we celebrate this day. In childhood days, mom would wake us up really early around 5 am. There is this ritual called as Abhyanga Snan (something similar to Spa). First the mother will do Aukshan (Aarti) for her children and then she gives a light massage with scented oil to her children. Then applies Utna (a form a fragrant scrub) and massages a little more and then she bathes them. (A wife does the same for her husband!) It used to be super fun because back then it used to be really cold around this time of the year and we would just shiver when mom would do all that for us. The moment she poured hot water on us was so heavenly because it used to shoo away all the cold that troubled us.

After this, the kids would go out and burst lot of fire crackers. It was sort of a competition who would arrive first and starts with their crackers. Sleepy heads like me were always the last ones :). We would dress up in new clothes and visit temple along with the family. Then visit neighbors and friends to offer them “Pharal” (Diwali snacks) and the secret intention used to be eat some of theirs too 😛

As the time is changing, so are the ways and  traditions. I don’t wake up at 5 am anymore. No bursting crackers. Temple visits are as per convenience – mostly it is skipped on festives because of so much of work at home. It is sad, but true. But I will try to preserve and nurture these traditions so that I am able to pass it on to the next generation when it arrives 🙂

Follow A Bit of Wisdom & A Bit of Play! on WordPress.com

© Aditi Ranade and www.aditirranade.wordpress.com (A Little Wisdom, A Little Play), 2014 to 2020, Unauthorized use and/or duplication of this material without express and written permission from this site’s author and/or owner is strictly prohibited. Excerpts and links may be used, provided that full and clear credit is given to [Aditi Ranade] and [aditirranade.wordpress.com] with appropriate and specific direction to the original content.
Loading Comments...
%d bloggers like this: