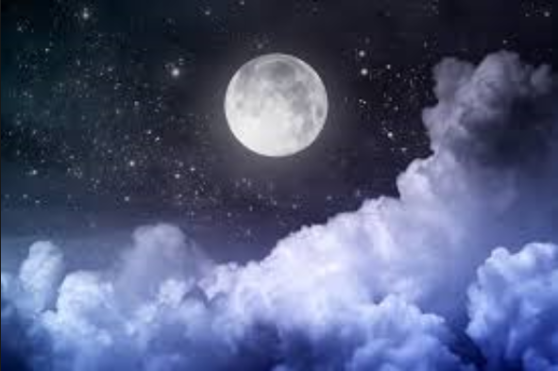 “Munmoon… Munmoon… stop.. Don’t go there. Its dark, you will be scared..” Munmoon’s mother was worried about her daughter. Munmoon would get angry when her dad would talk about getting her married. Often she left her home and wandered all alone in the deep darkness of the Moonland.

Moonland was a place from where the moons originated. Dimly lit, but sometimes pitch dark. It was a quiet and peaceful place where all moons lived happily. Like any other community, these moons believed too that their girls should be married off as soon as they attain the age of marriage and hence Munmoon’s parents were seeking alliances for her.

There was no scarcity of worthy alliances for Munmoon, for she was so beautiful, slender frame, very fair and glowing skin. She depicted her ancestor Moon in every bit! Many moons had lost their heart to her but Munmoon did not like any of them. She hated this tradition of moon marrying another moon. She wanted to explore other lands. She wanted to see how the world looked outside the Moonland, but her parents would never allow her.

“Beta Munmoon, tomorrow we have a family coming over to see you. The guy’s name is Holmoon. He is well settled and looks good too. His parents are good people. Please be good and present yourself well. If this alliance works, you will land up in a very good moon family.” Said Munmoon’s dad lovingly.

Having had enough of this loving compulsion, Munmoon decided to elope from Moonland. She was a free soul now. There was no moon around to bother her. She was enjoying her journey. She was set to tour this universe on her own. Munmoon was so happy to leave the Moonland far behind. She met new creatures during the journey. They were called clouds and stars. Soon Munmoon was friends with them and they all travelled together. They were having such a good time. Munmoon would hide behind the clouds and play peek-a-boo with the stars.

Munmoon was very happy to make new friends and be in a new land. She had come far away from the Monnland. She missed her family but she was ecstatic to be in this new world where no moon was in sight and no one persuaded her for marriage. As they continued to travel to new lands, Munmoon saw a very sharp shining light. What was it?

She was amazed to this light, it was something that she had never seen before.

“Where have we come Cloudy?” asked Munmoon to her friend.

“This is the Sunland. It is always brightly lit and it is very hot here. You stay away from this land for you are so delicate and beautiful, you will not be able to bear the wrath of the Sun.” Cloud tried to explain Munmoon about a new place they had arrived at.

“Sun is the king of this land”

“Yes, sometimes we need to go to his kingdom when the winds are harsh”

“I want to meet him. Will you take me there?”

“No Munmoon, you will not like it there. You will fall sick.”

“Come… I will show him to you from a distance, but don’t enter his land.”

Cloud took Munmoon a little closer to the boundaries of the Sunland. Munmoon was awestruck to get the first glimpse of Sun.

A stout and glorious body with sharp eyes and he emitted magnificent rays which created a halo around him.

“Who is this creature?” thought Munmoon to herself. She was so mesmerized by Sun that she started moving towards him step by step as if he had hypnotized her. It was love at first sight.

Follow A Bit of Wisdom & A Bit of Play! on WordPress.com

© Aditi Ranade and www.aditirranade.wordpress.com (A Little Wisdom, A Little Play), 2014 to 2020, Unauthorized use and/or duplication of this material without express and written permission from this site’s author and/or owner is strictly prohibited. Excerpts and links may be used, provided that full and clear credit is given to [Aditi Ranade] and [aditirranade.wordpress.com] with appropriate and specific direction to the original content.
Loading Comments...
%d bloggers like this: